The Bugg Report caught up with Dianne Bellchambers, Business Manager at Moose, to talk about all things Shopkins on the back of this years Toy, Hobby & Licensing Fair.

Shopkins has become one of the hottest toys on the market over the past 12 months. Can you provide a brief overview of the past year and how the brand has developed to where it is today?

The Shopkins craze has skyrocketed since the brand launched in 2014 and has continued to grow in popularity with each new season. The line now offers around 600 characters and playsets in multiple categories, including grocery, fashion, stationery and homewares, all of which inspire imaginative play among kids. The last 12 months has seen Shopkins rise up the ranks winning back to back Girls Toy of the Year in the US, 2015 Girls’ License of the Year at the recent Australian Toy Fair and take out the highest selling toy in the US for the Shopkins 12 pack. 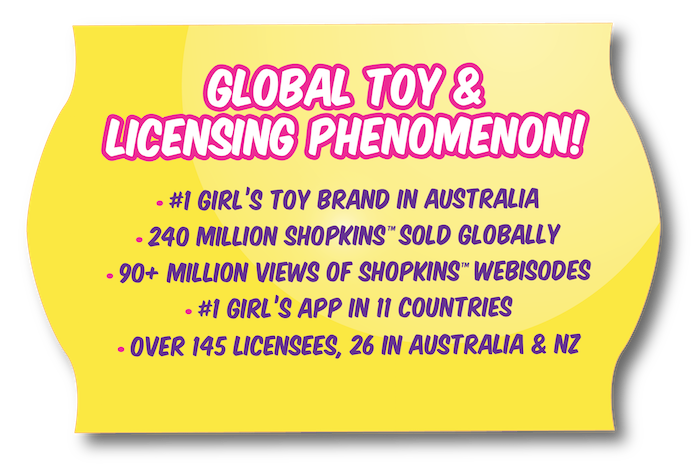 Being a privately owned Australian company, it is great to see the huge success that you have had with Shopkins and you’re now the number 6 toy company in the US. I believe that you now ship to over 90 countries globally; can you explain the growth that you have seen with this brand and how you have managed this?

In 15 years we have grown from a team of 12 to over 250, with employees in Melbourne, Los Angeles, Hong Kong, China, Vietnam, London and Europe. The growth has been on the back of innovative product. That really is the key to Moose. We heavily invest in developing quality products that inspire kids and have great play value. We support this with out of the box marketing to make sure we are reaching kids and staying relevant in their changing world. Shopkins is a great example of this. The growth has been managed by a very talented team of dedicated employees. The people are what make Moose so unique, it is a high energy and high performance environment. We like to work hard but we also like to have fun.

Jacqui Tobias, the creator of Shopkins, has communicated that the idea for the brand was based on kids love of shopping and collecting; how long did it take for the brand to become a reality after the initial concept was discussed?

Jacqui was inspired by her grandchildren playing with their grocery playsets and her experience with her children who loved collecting football cards and trading them. Moose had enjoyed lots of success with The Trash Pack and we felt there was an opportunity in this space for a shopping theme. We recognised that many kids love miniaturised items and brainstormed how to incorporate that into a toy. It took some time to get the personality just right for each character with Cupcake Queen being the first developed.

We pay particular attention to the detail as kids really notice the effort that goes into defining a character. Shopkins have been developed with high-quality, detailed expressions to bring to life their individual personalities. A talented team have spent many hours designing and developing the characters, teams, different finishes and backstory to create the brand.

From a brand development point of view, did you envision Shopkins achieving what it has to date, or was the smash hit success somewhat surprising?

We knew that kids were inspired by products that they could relate to. Shopkins brings everyday objects to life and that is what resonates with kids. The objects are relatable and the personalities are quirky and fun. Additionally, the collectability of Shopkins encourages social play, as fans trade characters among friends and work together to grow their collections. The characters offer playground currency and the inclusion of limited edition characters adds to the chase and kids have grown to love the “surprise and delight” factor.

We felt Shopkins had a great theme and was certainly different to what was in the market place. We knew that gave us a great foundation to launch the brand but there are many other factors such as content, marketing and distribution that contributed to the amazing success we have seen for Shopkins.

Shopkins is uber popular online with millions of views on YouTube as well as social engagement on Facebook and Twitter. The web presence is obviously a huge driving force behind the marketing for Shopkins. How have you approached this new craze of online engagement for Shopkins?

Kids these days look for instant engagement from brands they love; if that engagement does not exist direct from the brand, then their peers and influencer network fill the void. This has helped to create the demand for YouTube. YouTube creates an environment that has made entertainment and brand engagement accessible to all ages. TV still plays an active role in the lives of kids but YouTube is fast becoming the preferred “screen”.

We launched Shopkins in 2014 with no TV Series or mainstream entertainment. We knew children were consuming entertainment on YouTube as much as traditional TV. We invested in the creation of original animated webisodes and seeded them on our YouTube channel. We now have over 25 episodes and over 170,000 subscribers on the Shopkins channel, hitting 90 million views globally. This has helped us to tell the story of the Shopkins characters and create engaging content.

From an Australian point of view, Merchantwise is running your licensing business for Shopkins; can you give a brief overview this area of the brands development?

In more recent times we have looked beyond core product/collectibles to see if there is a business case to offer licensed items like apparel, games and publishing. These licensed products help us to engage further with our fans. For Shopkins, the brand and characters lend themselves perfectly to a licensing program where categories such as apparel, homewares, stationery and more extend kids’ love of the brand into other aspects of their life. We now have over 145 licensees for Shopkins globally setting Shopkins up as a lifestyle brand.

Merchantwise in Australia has been instrumental in this success. They have worked hard to source best in class partners to help bring Shopkins consumer products to life and further support our toy line.

In terms of global popularity for Shopkins, in which countries have you seen the highest growth for the brand?

Shopkins continues to grow worldwide! Having only been in the market since 2014 the brand is still experiencing phenomenal growth and we expect it will continue to do so. Markets that are now more established such as US, Canada, UK, Australia and New Zealand are continuing to see strong sales.

Our international partners have launched more recently and the brand has certainly translated in many markets with Brazil, UAE, Russia, France, and Philippines among the strongest Shopkins partners.

I believe that you are developing a TV series for Shopkins to launch this year; can you give us any updates on the series to-date?

Kids these days look for instant engagement from brands they love; if that engagement does not exist directly from the brand, then their peers and influencer network fill the void. This has helped to create the demand for YouTube. YouTube creates an environment that has made entertainment and brand engagement accessible to all ages. TV still plays an active role in the lives of kids but YouTube is fast becoming the preferred “screen”.

You have just returned from the Toy Fair in New York this February; could you provide some highlights from this trip from a Shopkins point of view?

It was an amazing fair where Shopkins received an outstanding response from retailers, buyers, licensees and media. We were very privileged to take home a number of awards including:

It was a fantastic result to cap off a big 2015 and to recognise the hard work from the entire Moose team to make Shopkins a success. The exciting part is that we have even more great product, retail activations, marketing initiatives and licensed products for 2016 to keep building the brand’s momentum.

Thank you for speaking to The Bugg Report and we look forward to hearing more about the success of Shopkins throughout 2016.