The Bugg Report caught up with Nicole Chungue, Licensing and Sponsorship Executive Consumer Products at BBC Worldwide Australia & New Zealand, to talk about the response to Hey Duggee at this years Toy, Hobby & Licensing Fair.

The response to Hey Duggee was great during Toy Fair. I imagine that you had a similar response during your meetings with licensees and retailers.

This Toy Fair has been one of our most exciting yet given the response to Hey Duggee at the Show. We had some great meetings with retailers and licensees and the enthusiasm for the brand is exciting. Hey Duggee is a priority preschool brand for BBC Worldwide and the market is aware how strongly we are supporting this property across all touchpoints in the UK and in Australia. 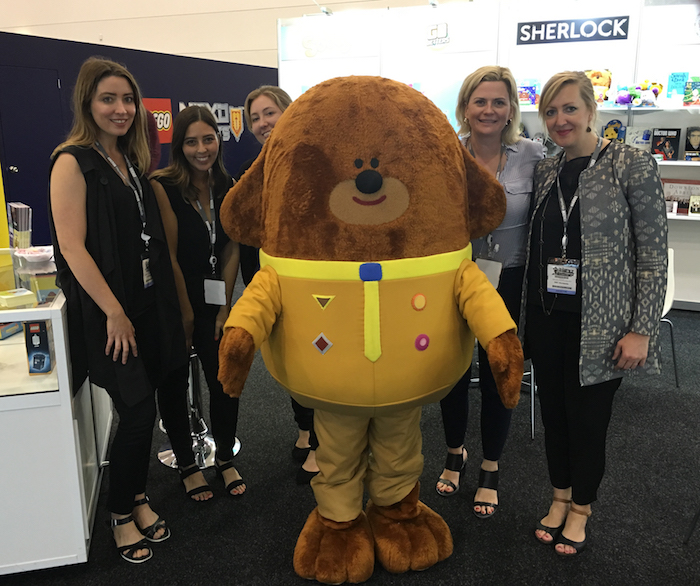 Can you give us a breakdown on Hey Duggee in terms of categories available from a licensee perspective and what the current licensee portfolio looks like?

We have partnered with Jasnor on toy distribution in Australia. Our Publishing program is represented by world class leaders Penguin Random House and the Hey Duggee DVD has been released through Roadshow. Several other key categories are to be announced shortly.

The new television series looks really good. How has the response been in terms of ratings and popularity?

Hey Duggee is rating strongly across both CBeebies and ABC KIDS. With an average audience of 195,000 fans on ABC KIDS since January, Hey Duggee is firmly setting its place as one of the top rating programs on the channel. We’ve seen great success across all the brand touchpoints, particularly in the area of apps and gaming. Hey Duggee episodes regularly show up in the Top Ten episode downloads on iTunes and the first DVD was a great success in the market since the release in November last year.

I believe that the plush toys sell through in Myer has been very positive for Hey Duggee. Can you expand on this?

We were receiving several requests for product through CBeebies so decided with Jasnor to launch product in the market pre-Christmas. The toy launch was an instant success and we had some incredible sell-through figures, particularly on the Woof-Woof Duggee plush.

Hey Duggee will be appearing in some concerts in Melbourne very shortly. Can you tell us a bit about these appearances?

Duggee himself will be appearing as a special guest at BBC Proms Australia in April this year, as a part of the ‘Classics for Kids’ program. These interactive concerts are a great introduction for Kids to the world of live classical music, conducting and musical instruments. And Duggee will be on hand to make sure every child can earn their Music Badge!

Series two of Hey Duggee has already been commissioned. When can we expect to see the new series airing?

Series 2 will be airing on CBeebies channel in the second half of this year with another 52 episodes of Hey Duggee for parents and kids to enjoy!