Football Federation Australia (FFA) and The Walt Disney Company Australia join forces for the Star Wars Round, which kicks off Friday 8 December, 2017.

To celebrate the Star Wars Round, a limited edition BB-8 supporter ball has been produced, which will be available for purchase through the official Hyundai A-League online store, shop.a-league.com.au, club stores, and selected Rebel stores in Queensland. Western Sydney Wanderers and Melbourne City FC will also have a select range of club-specific co-branded merchandise available. 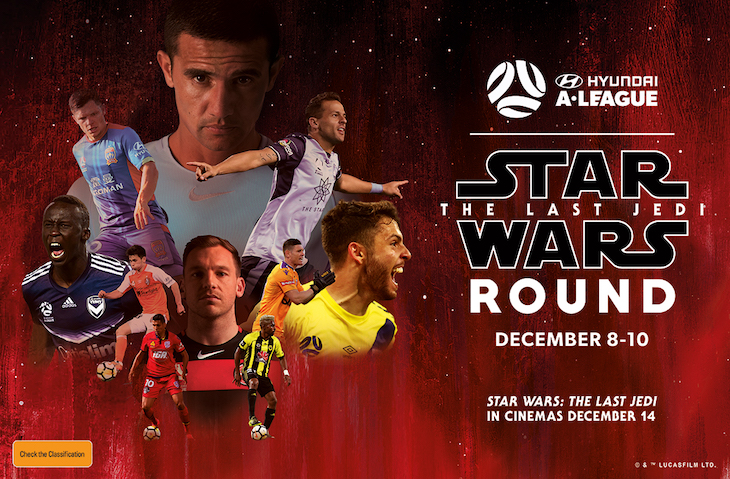 “Star Wars is one of the world’s most powerful brands and football is the world’s biggest sport. Like football, Star Wars has super fans that span the globe, it’s a hugely successful franchise and to incorporate this into a round of the Hyundai A-League is very exciting.”

“We are constantly looking to engage with new audiences and expand the football family, and this partnership provides a great way to do so in what is mutually beneficial for both parties,” Mr Gallop said.

“We are thrilled to bring Star Wars, and its much-loved characters to Hyundai A-League stadiums across Australia ahead of the release of Star Wars: The Last Jedi on December 14,” Managing Director of The Walt Disney Company, Australia and New Zealand Kylie Watson-Wheeler said.

“Competitive sport can produce some of the most enthralling storylines, much like the acclaimed suite of Star Wars films, and we look forward to celebrating the hero’s journey through best-practice activations, content and experiences for families and fans alike.”

As part of Star Wars Round, a co-branded video has been released, showcasing the excitement, entertainment and high-stakes of both brands.