In 2016, the AFL’s Indigenous Round was named after one of the game’s Aboriginal pioneers, Sir Doug Nicholls. AFL CEO Gillon McLachlan described Sir Doug’s contribution to society as one of football’s most interesting stories.

“He represented both the values of our game and epitomised the spirit of reconciliation,” McLachlan said.

“He was the first Indigenous player to represent Victoria at state level, while playing for Fitzroy, and during his life he was an elite runner, boxer, Churches of Christ pastor, Justice of the Peace, was awarded both the MBE (1957) and the OBE (1968) before being knighted by Queen Elizabeth in 1972, and served as Governor of South Australia.”

“He was a pioneering campaigner for reconciliation but his love for and commitment to Australian football was the glue that brought together all the other facets of his life.”

The AFL Commission decided to name the round after Sir Doug following a discussion at the league’s indigenous advisory council.

To commemorate the special themed round, all 18 AFL Clubs presented their specially designed Indigenous guernseys which were designed by a range of Indigenous artists. Many of the guernseys have had great sales to date with the likes of Carlton selling out of their Indigenous guernsey within the first 12 hours of its release. 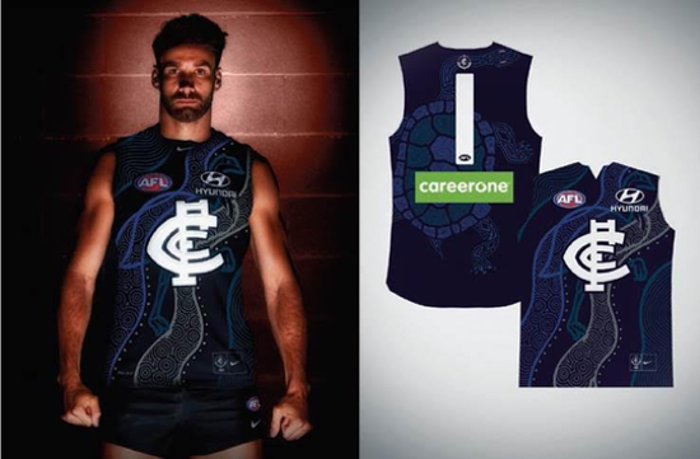 The Carlton guernsey which was produced by Nike and designed by Mandy Nicholson was in honour of Sir Doug Nichols. It featured the essence of a turtle creation spirit on the back of the jumper, representing the journey and Sir Doug’s tireless efforts even into his older years.

The small circles along the sides of the rivers shows that many paths travelled by Sir Doug and his people to Melbourne, for traditional purposes of trade and politics, but also the many paths made towards reconciliation in the past, today and into the future.

The Emu is in a powerful running stance to honour Sir Doug’s running career and fitness, and to depict him always surging forward for his people, never standing still.

Finally, the elements on either side of the emu design depict smoke from a traditional Welcoming Ceremony, welcoming all visitors to Melbourne.

All club Indigenous guernseys are available directly from each Club Shop or by visiting www.shop.afl.com.au/indigenous online.