The Powerpuff Girls celebrate 20 years of saving the world before Bedtime and a new sleepwear range by Pyjama King Peter Alexander.

Cartoon Network is celebrating the 20th anniversary of The Powerpuff Girls in Australia and has launched a new fun and fearless range of sleepwear by Peter Alexander. As the original harbingers of girl power, The Powerpuff Girls have been an inspiration to generations of girls and young women since its launch in 1998. 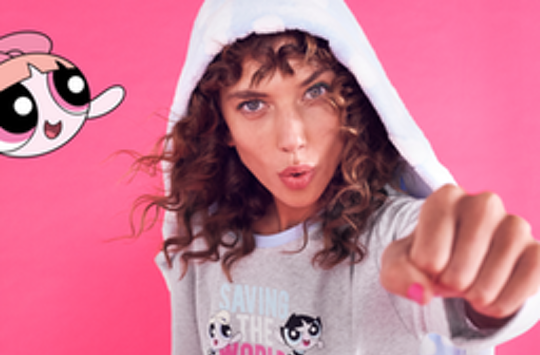 Following the release of the Peter Alexander sleepwear range today as part of the brand’s Wanna Play collection, and an exclusive unveiling in Sydney, the celebration will continue with the global rollout of new episodes and products. Fourth sister Bliss, voiced by Australian-Chinese YouTube superstar ‘Wengie’, will also make a highly-anticipated return throughout the year in new episodes.

“We are so excited to be working with Peter Alexander to highlight the enduring legacy of the show and the girlpower it embodies”, said Robi Stanton, General Manager of Turner Australia, the company that operates Cartoon Network. “This colourful pop-culture collection highlights both the incredible bond between sisters, and just like The Powerpuff Girls, the PJ’s are completely super-cute and super-fierce!”

From the moment they started to save the world before bedtime, these three superhero sisters, became more than characters on a show. They are a global phenomenon with a message of empowerment that continues to resonate today with a reimagined series that debuted in 2015.

The Powerpuff Girls won a 2017 Gracie Award in the “Family Series – National” category, recognizing high-quality programming for girls and women. The series has also played an important part in Cartoon Network’s overall commitment to STEAM education by inspiring children to learn coding with special episodes and programs including Google’s Made with Code GIF: The Powerpuff Girls and Scratch from the MIT Media lab.

With more than A$3 billion in retail sales generated globally since its original debut, The Powerpuff Girls is one of the most enduring and top-grossing Cartoon Network brands of all time. Over the years, Cartoon Network has teamed with a roster of more than 150 global licensing partners across toys, apparel, publishing and themed entertainment, among others.

Peter Alexander is the latest name on a long list that includes: designer Jeremy Scott and Moschino on a global fashion collaboration that was launched in 2016, along with Hot Topic, Spin Master, McDonalds, Ferrero, Cold Stone Creamery, IMG Worlds, Cartoon Network Amazone, Live Nation and Hachette

The girls will also be a major part of the branding on the recently-announced Cartoon Network
Wave, the first ever Cartoon Network-branded cruise liner which will be making its maiden voyage to Australia soon after it launches in late 2018.