I distinctly remember growing up with the Classic Thunderbirds electronic marionette TV series in the mid 1960s. The show would air on a Saturday morning in Australia and I could not wait to follow the drama and rescue escapades of Thunderbirds. Last year was the 50th Anniversary of this iconic brand, where there has been 3,000 Thunderbirds themed products produced since its debut. It has certainly stood the test of time and the contemporary version, Thunderbirds Are Go continues the great tradition.

We were lucky enough to sit down with Trudi Hayward – SVP Head of Global Merchandise at ITV Studios Global Entertainment (ITVSGE) before Brand Licensing Europe to talk about the journey, which she has been part of in ITV establishing the brand in multiple markets around the world. 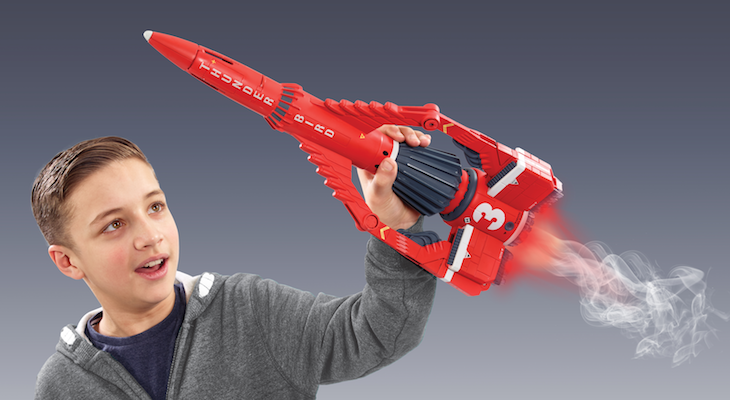 You are a true veteran of the Licensing business and have driven the Thunderbirds Are Go merchandise program for ITVSGE over the past five years. What was your underlying motivation here?

Thunderbirds is an iconic British TV series that has inspired generations of fans and when we first decided to create a new version of the show, we had no intention of messing with what had already worked. Whilst retaining Thunderbirds originality was key, it was important to find the right balance between old and new so the series appealed to a new modern audience.

We’ve still got the enduring themes of selfless heroism, rescue, family and there’s no violence in the show, just a great deal of action and adventure. The show’s product values are fantastic and Thunderbirds Are Go is of cinematic quality. It’s been thrilling to assemble such a fantastic licensing programme for the new show and to see partners producing creative, innovative and fun products. We’re building Thunderbirds Are Go into a global brand and taking the show both into markets that already have an on-going affection for the franchise, and also to new international markets seeing it for the first time.

Do you believe the rich dramatic storylines, brilliant characters and vehicles created by Gerry Anderson has been a significant contributor to the longevity of the brand?

Of course, these qualities have all been key to the success of the new series. It was groundbreaking then, it is groundbreaking now. We’re also now seeing original fans of the series introducing their kids and grandkids to enjoy the series – it is a true family show.

The brand has great depth. What characteristics do you look for in your lead Consumer Products partners that will capture the heritage and DNA of the brand in the product offerings?

Thunderbirds Are Go is all about rescue and adventure and the use of iconic vehicles and technology. When signing consumer products partners, our strategy therefore hinges on signing partners that have the expertise to develop a range of products that will bring these key elements to life.

How do you manage the classic V contemporary platforms? Do you work with different partners?

With classic Thunderbirds, it’s important for us to make the property appeal directly to consumers for whom Thunderbirds formed a significant part of their childhood whilst also engaging new audiences with contemporary and modern product lines. As such, our approach is two-fold. We have partners producing quality gifts and collectibles targeted at the nostalgia and retro market. To attract modern consumers, we’ve worked with partners on some really creative collaborations.

Whereas for Thunderbirds Are Go, our focus is on targeting kids and offering them new and exciting ways to engage with the brand beyond the TV screen.

Have you considered the seasonal markets for Thunderbirds, particularly Fathers Day?

Your production partner Pukeko Pictures has done an amazing job in producing the new series. Did you have any input into the direction and have you been able to visit the set?

We have regular discussions with the executive producer Giles Ridge in regards to what elements are particularly important for the merchandise, but the direction is, of course, with the experts. I have visited parts of the set in New Zealand, yes, but unfortunately they were not filming Thunderbirds Are Go when I was there. I did get to see some of the miniature sets whilst I was there and was very impressed!

Can you tell us a little about your key merchandise programs underway in the UK?

The UK licensing programme for Thunderbirds Are Go is doing very well and we’ve got over 50 partners signed across all key categories. To support the UK debut of the second series in October, we’ve got a number of new product launches this autumn/winter. Vivid is growing its toy range, including a new supersize Thunderbirds 3, new combo packs and jigsaw puzzles. The Spin Master range will also be added to with the launch of their Air Hogs RC Thunderbird 2.

One of the next phases of the launch in the food category is new baking kit from Symingtons reached ASDA stores in September. We’ve also just announced that classic British food company Bernard Matthews will be taking Thunderbirds Are Go into new supermarket aisles and launching our first frozen goods product this autumn. Beacon Confectionery is adding Thunderbirds Are Go products to its confectionery range in 2017.

Simon & Schuster has new activity books on the way; Worlds Apart is launching a homewares line; Kokomo has new additions to its personal care range; there’s a line of watches from London Europe.

Thunderbirds Are Go are soon to launch merchandise programs in Europe. Can you tell us a little about the key markets that you will target?

We’ve just launched merchandise in France, the Nordic region and Benelux with the toy range from Vivid Imaginations leading the way, and alongside that we’re collaborating with licensing agents to grow local consumer product programmes including Nelvana in France, License Connect in Benelux and Alicom in the Nordics. We’ve got a number of additional markets to announce in due course, including our new agent in Canada and toys launching from this Christmas, and merchandise coming in Brazil in 2017.

What’s the plan for Asia?

In Japan, we’ve got NHK as our broadcast partner and a solid merchandise programme to support this. The show has launched in China and Taiwan and will roll-out shortly in other countries across the region. We’re giving the brand chance to get firmly established and then we’ll begin rolling out consumer products shortly.

Trudi, can you give us a snapshot as to how the 50th anniversary program rolled out for Thunderbirds? What was the highlight?

Thunderbirds celebrated its 50th anniversary in September 2015, the show broke new ground in animation and has lived on in our cultural consciousness long since it first aired on TV. To commemorate the 50th anniversary, we worked closely with our licensing partners to develop high quality limited edition and collectible lines using the anniversary logo. It was important for us to recognise five decades of Thunderbirds heritage and give loyal fans the opportunity to be part of the celebrations in the anniversary year and beyond. My personal highlight would be seeing the vault at New Zealand Mint, where the range of limited edition Thunderbirds collector coins were kept.

The concept of collaboration has made its way into our industry over recent years. Have you allowed Thunderbirds to be part of this pathway? If so what was the stand out partnership?

We’ve worked with partners on some really creative collaborations. For example, in the UK we have recently worked with British fashion designer Lou Dalton for a collection of Thunderbirds products, which featured in GQ Magazine, The Observer, Shortlist Magazine and Telegraph Magazine. In Australia, we’ve also recently partned with Ben Sherman for a line of t-shirts, which will be in market in November for Christmas.

We understand that Thunderbirds Are Go launched on Amazon some time ago. Can you update us on your progress with this global platform and what does it mean to the brand for the long term?

Thunderbirds Are Go launched on Amazon Prime in the U.S. during April 2016. They got really behind the series launch, having panels with voice cast in both Los Angeles Wondercon in March and San Diego Comic Con in July. The online community in the US is growing and Amazon Prime is now getting ready to launch the second part of season 1 this Q4. The series is also available in the UK and will roll out to other markets. We’ve been delighted with the show’s performance so far on the platform.

What are your key mobile platforms for Thunderbirds?

We’re ensuring there’s content distribution right across the board for Thunderbirds Are Go including TV, video-on-demand, website, social media, digital games and apps. Today’s generation of kids are looking for constant access to their favourite brands. We have to be where the kids are, and this means being across all platforms including YouTube, Facebook and Twitter in addition to offering an engaging website and digital games, like the Thunderbirds Are Go: Team Rush global app with Miniclip.

And finally what does the next 12 months look like?

For 2017, we are very excited about the lift that the new content will bring to our licensing programme, with new villainy, jeopardy, and tons of rescue missions. We are confident that kids will be even more enthralled with the show. Later in the year, we will see series three arrive in the UK. There is huge potential for the property across the world and we will be working hard to extend its reach in new territories. A big part of that will be increasing our use of different online and digital media so that we are reaching all the potential new Thunderbirds Are Go fans.

We would like to thank Trudi for this interview and we appreciate her time and for the information that she has provided. It looks like Thunderbirds Are Go are in good hands.