The Bugg Report had the opportunity to speak to Will Byron, WWE’s SVP International Consumer Products & Retail, to find out more about the WWE brand’s enduring success.

Thank you for speaking to The Bugg Report, Will. Can you tell us how the WWE brand has performed over the past year?

The brand continues to perform well and 2016 was a big year for the WWE yet again.

WWE is a unique property: it’s the best of both sports and entertainment. Fans engage with the brand via multiple touch points including TV, WWE Network, digital & social media, WWE Studios, music, live events, Consumer Products (CP) and the WWE Performance Centre… not to mention our larger than life Superstars that make up the WWE and NXT rosters.

We really are a 365 day brand; importantly for Retailers we are broadcast 24/7 via WWE Network that includes all live pay-per-views, scheduled programming and a massive video-on-demand library. Our flagship shows Raw and SmackDown Live are featured each week on Fox 8, 52 weeks of the year. We overlay this with our ‘Live’ shows in market every year.

How integral is TV to the brand’s ongoing popularity?

TV partnerships are key to the ongoing success of the brand. WWE has 78 international broadcast partners, including Foxtel in Australia and Sky in New Zealand. WWE is featured on Fox 8 in Australia and Sky Box in New Zealand, giving us more than 15 hours’ of exposure each week including the 2nd runs of RAW and SmackDown Live. Now that Raw and SmackDown have separate rosters and their own distinct storylines, there is more content than ever before. All of the action is PG rated, family-friendly entertainment, featuring larger than life characters with storylines of ‘good vs evil’ that translates in every culture and language. From a CP perspective WWE is a year-round property which is also a great proposition for retailers in this market.

Will, can you tell us about the WWE Network and what it includes?

The WWE Network is the first-ever 24/7 over-the-top premium network that includes all live pay-per-views, scheduled programming and a massive video-on-demand library. The WWE Network currently has nearly 1.5 million subscribers worldwide and is available in more than 180 countries.

Live events presumably remain a pivotal driver for the brand?

We put on more than 500 live events around the world every year. There have been 10 ANZ live shows in 2016, six more than 2015, featuring both WWE Live and NXT shows, with NXT filming the Melbourne show in its entirety for WWE Network. It is certainly our objective to give our fans more WWE content than ever before and to grow our brand across the ANZ market. Continued growth in our Live Events business is critical for not only ongoing fan engagement but attracting new fans to our brand. It also provides us the opportunity to support and engage our partners and fans utilising our talent for meet and greets, CSR and Retail appearances.

Can you tell us more about NXT and what this means to the WWE brand?

NXT has evolved into WWE’s third global brand alongside Raw and SmackDown Live selling out arenas all over the world while featuring a diverse group of aspiring and inspiring talent that are working to perfect their in-ring skills while developing compelling characters in an effort to revolutionise the industry.

NXT is the perfect complement to RAW and SmackDown Live, and super serves our most passionate fan base with its unique vibe, energy and social following. 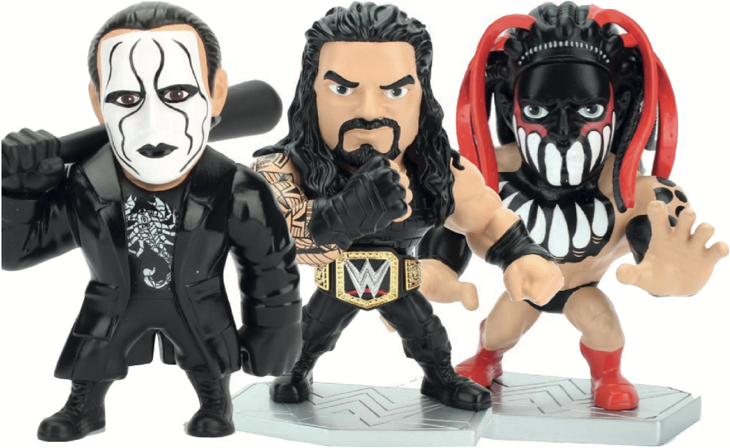 Will; how has the CP division, and in particular the Toy category, fared recently?

Our ANZ business has seen growth over the last 12 months, as has our CP business.

Our CP business continues to grow from strength to strength in Australia with new Licensees and categories coming on board every month; our momentum keeps building. With our global partnerships including Mattel, 2K, Headstart International & Impact Posters, just to name a few, we are starting to gain some real traction across this market as we continue to engage new partners and create new programs. Strong partnerships are key to our success and our best-in-class Toys represent a major segment for us.

Mattel is our master toy partner and WWE’s consistent performance in the action figure category shows the power and collectability of the brand. New innovation will also drive collectability this autumn and throughout 2017: Three Count Crushers will be popular this winter bringing WWE to life with large-scale figures that kids can interact with. The new Tough Talkers segment will launch in spring, bringing the Superstars to life and featuring real phrases and real rivalries.

There are also dedicated collector’s ranges – Defining Moments for 2016 and Retro Throwback figures for 2017 – while other range highlights include the TV driver Crash Cage, Championship Belts, Mask assortments the Roman Reigns Gauntlet and much more.

In addition, we have added a selection of new worldwide leading partners to the licensing programme, which we believe continues to feed both high desirability and collectability across our diverse consumer fan base.

Jakks Pacific (via Headstart here in ANZ) has introduced a range of role play and dress-up items, which will be launched in market shortly. The range will be extended later in 2017 and we see Jakks as an integral partner for the future.

Headstart has also just launched their WWE Ooshies range featuring some of our WWE Superstars.

Retailers can also expect to see new ranges from Impact Posters, Universal Magazines and Empire apparel as we move through 2017.

Funko Pop Vinyls are also available here in Australia and are distributed across Specialty stores by Sports Cards Australia.

2K is our key gaming partner and we see this as another important pillar for the brand. WWE 2K17 has earned critical press and fan acclaim and delivers stunning graphics, ultra-authentic gameplay and a massive roster of WWE and NXT’s popular Superstars and Legends. The company is also expanding its mobile gaming offering by incorporating a mixture of fremium and pay-to-play options for consumers.

Madman Entertainment, our ANZ Home Video partners, have re-launched quite a number of our key Catalogue titles over the last 12 months on DVD and Blu Ray including more than 20 new titles which includes all 12 PPV’s and 6 multi disk, themed, superstar led and match compilation titles. Our WrestleMania DVD continues to be one of the best-selling sports titles in the market each year.

We have a number of major tours and pay-per-view events taking place in 2017, including WrestleMania 33 on April 2nd in Orlando, Florida. This global extravaganza is our Super Bowl, or other brands’ major theatrical releases, and we will be creating cross promotional programs and on the ground events locally along with some eye catching in-store POS and press activity in the run-up to this and each of our events.

In 2016 we were visible across all ANZ Retailers led by Mattel, 2K and Madman and of course with new Licensees on board we expect even more WWE activity in market.

In 2017, we will support our live tour across all lines of business including Retail. We will also once again look to create interaction with our partners using our Superstars in a variety of ways, including personal appearances and meet and greets. WWE is a unique brand with incredible fan engagement and when we activate at Retail you really see the power of WWE.

We look forward to creating great activation for our Retail partners and to another strong year of growth.